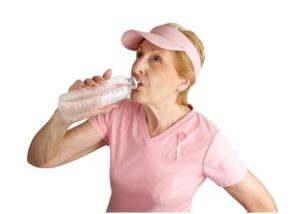 Fitness is undoubtedly an important aspect of senior care. The benefits to seniors remaining active and as fit as is reasonably possible are almost too numerous to list, spanning everything from improved cardiovascular health to mental improvements.

A high-tech option is gaining a lot of traction in senior care circles:  Cybercycling.  If current tests and trials continue to be positive, cybercycling could soon be coming to a senior care center near you.

Cybercycling combines a stationary exercise bicycle with video game style elements, such as simulating a race between several participants. Depending on the setup, participants might have private screens mounted on each bike, or else they are shown video on a large screen in front of the group.

At first glance, this seems like a basic idea – pairing exercise bikes with video screens has been around since the 1990s. However, having large groups all cycling together as an exercise solution for seniors is new. The results so far have been very encouraging as well!

What Are the Benefits of Cybercycling For Senior Care?

For starters, use of stationary bicycles means cycling is accessible to seniors who may be unable to bicycle effectively around real-world spaces, due to dementia or physical issues. The video screens still create a perception of travel, even if the bike never leaves a room.

Plus, in general, bicycling is great cardiovascular activity. Being able to do the exercise in groups also turns cybercycling into a social event, encouraging healthy competition and friendship-building as they exercise.

However, the real surprise coming out of studies about senior cybercycling is that it seems to give seniors a brain boost!

A clinical trial conducted at New York Union College showed that seniors who spent three months cybercycling showed a 23% reduction in risks of having increased cognitive impairment. What is particularly notable is that this effect required the video gaming aspects to be in place. A control group which merely pedaled on traditional fixed exercise bikes, without the extra video stimulation, showed far less improvement.

The video game elements required seniors to be paying attention to their performance, as well as making choices like when to start turning for curves. Cybercycling became a form of exercise that integrated mind and body work, improving both.